If you are a Precinct Committee Person (PCP), you have the power to change operations and policies of your county, state and even national party. You also can have say over your party’s policies on abortion, physician-assisted suicide and other important issues. At times, PCPs even have the power to appoint legislators to fill vacancies in office. As the 80th Legislative Assembly wraps up, a season of more legislative vacancies has heated up and PCPs are once again wielding significant influence over the political process in Oregon. 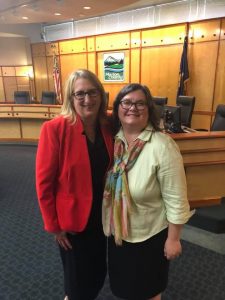 Within the last two and a half years, nine pro-life legislators have been appointed to office through a process that begins with local PCPs. This week, pro-life champion Denyc Boles was appointed to fill an open state senate seat after local PCPs selected a slate of three possible candidates. Senator Boles was then selected by the local county commissioners out of the slate of three.

If you are not a PCP, now is the time to get involved!  Senator Boles’ appointment to the Senate opens up her seat in the House for the same appointment process. Meanwhile, at least one other pro-life legislator is planning to retire mid-term after session ends, again triggering this same process.

This appointment process is one of the most important actions PCPs can take part in. Each PCP is a representative of their party and voters in their area. The vote of a PCP speaks for hundreds or even thousands of voters.

If you are a registered Republican or Democrat you can become a PCP for your party. Typically you would need to run in a primary election in an even-numbered year. Since it is not an election year you can seek to be appointed as a PCP by your county party. Contact the county chair and ask them what you need to do to being appointed.

To read more about becoming a PCP click here.