I want to make sure you know about four pro-life men who are running for office this primary election.

It really is difficult to overstate the importance of this election.   We have had a series of close and important Presidential elections.  It would be tempting to take a diversion here and discuss the consequence of the Lincoln election, the JFK election, the Reagan election.  I suppose you could argue with me that I am exaggerating, but this is my blog so I can say what I want to.

This has been a crazy, chaotic, unpredictable Presidential Primary and we are not done yet.  However, at this point it is clear that one proven pro-life candidate has the best opportunity to win the nomination and that is Ted Cruz.

Ted Cruz has a 100% pro-life voting record in the US Senate.  As Solicitor General of Texas, he successfully defended pro-life laws before the Supreme Court.  As a Presidential candidate, he has been unwavering in his Pro-life position.

Who will be the next Supreme Court, the fate of the Pain Capable Infant Protection Act, and whether taxpayer funding will continue to flow to Planned Parenthood are just three of the many important pro-life priorities hanging in the balance of this election.

This is why Ore 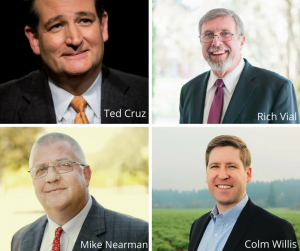 Congressman Kurt Schrader supports abortion on demand for any reason.  He likes to talk like a “Moderate” but there is nothing moderate about his voting record.  And he is “beatable”.  District 5 is more Republican and more conservative than it was even two years ago and with the right opponent in November, Schrader will have a real contest on his hands.

Pro-life voters have an exciting opportunity in May to elect a challenger who can win and who has no higher priority than protecting the unborn – Colm Willis.  Since we worked side by side while he was Political Director here at ORTL, I have a completely different perspective on him as a candidate.

For instance, I know from experience how smart, dedicated and hard-working he is.  I know that Colm understands how things work on Capitol Hill and that he won’t need on the job training.  I know that Colm genuinely prefers the company of everyday Oregonians to the powerful and connected.   I know that Colm is dedicated to his wife and daughters and to marriage and family as the building blocks of a civil and just society.  And I know without a single doubt that he is our best choice in CD 5.

Pro-Life State Representative John Davis surprised everyone by announcing that he would not run for re-election right before the filing deadline.  This Primary quickly developed into a three candidate battle.  Richard Vial of Hillsboro is the only candidate in the race who is pro-life.  Rich has given back to his community as a school board member, church leader and serving on the Washington County planning Commission.  Rich and his wife have raised thirteen children including seven adopted from Vietnam.  This record is a good indicator that Rich will be a thoughtful and principled Legislator. Because this is a three way race, the margin of victory is likely to be very small.  It is very important for pro-life voters in this widespread suburban district to vote Rich Vial by May 17th.

Two years ago, Mike Nearman beat an incumbent who had really lost his way in Salem.  This was a great example of our electoral process working!   In his first term as a State Representative, Mike has been a consistent and outspoken advocate for all Oregonians – including a place where candidates rarely speak out so boldly – the state Voter’s Pamphlet.  Here is a quote from Mike’s Voter Pamphlet statement, “My party began as a movement to abolish slavery and I am proud to walk in that tradition which respects all life from the unborn to the disabled to the very old.”

He has earned our support and the pro-life voters in House District 23 can be confident in sending him back to the Legislature for another term.