After signing HB 3391 into law in August (a bill that forces insurance companies to cover abortions with no co-pays or deductibles), national media hailed Kate Brown as pushing the most progressive abortion legislation in the nation.  But pro-lifers on the front lines in Oregon know that Governor Brown has been an abortion extremist her entire career in politics, supporting abortions even up until the moment of birth.

Kate Brown was first appointed to a vacant seat in the Oregon Legislature in 1991 after having worked as a lobbyist for the Women’s Rights Coalition—a group that supported late-term abortions.  Planned Parenthood refers to Governor Brown as a “legislative champion,” recognizing that even when she served in the Oregon Legislature from 1991 to 2009 she was known as abortion-rights extremist.  Brown even sponsored a bill that would have shut down pregnancy resource centers had it passed (PRCs provide care and assistance to pregnant women and babies at no cost to taxpayers). 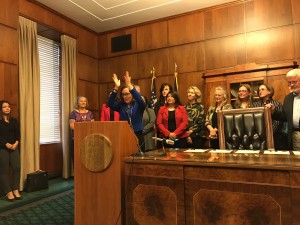 After serving as Secretary of State since 2009, Kate Brown stepped into the governor’s office in 2015 when former governor John Kitzhaber resigned due to pending criminal investigations.  She then immediately appointed lobbyist Brian Shipley as her chief of staff.  Shipley was then a member of the board of directors of Planned Parenthood Columbia Willamette.  As a new Governor, Brown was the kick-off speaker for Planned Parenthood’s day of Action at the state Capital.  In that speech she said she was proud “Oregon is the only state left with no restrictions on…abortion.”

When running for governor in 2016 to fill out the remainder of Kitzhaber’s term, Kate Brown was supported by all the pro-abortion groups that lobby for abortion to remain legal until birth, including the National Organization for Women (NOW), NARAL, Planned Parenthood Advocates of Oregon, and EMILY”s List.  Cecile Richards, Planned Parenthood’s national president, even wrote a fundraising email for Brown praising her as a champion for abortion rights.  Richards, who is perhaps the top abortion activist in the country, called Brown “one of the most effective and progressive leaders this nation has ever seen.”

Fast forward to this August when Governor Brown signed HB 3391 into law, making abortion free for nearly every woman in Oregon.  This bill allows for up to $10 million in taxpayer funded abortion for undocumented immigrants and forces insurance companies to cover abortions with no co-pays or deductibles.  The so-called religious exemptions are extremely narrow and, in any case, provide for the state to pay for abortions for anybody on an insurance plan exempted from covering abortions.

Kate Brown’s ceremonial signing of this bill on Monday was another attempt to make a statement about her extreme position on abortion.  Although the bill was already made law, she chose to celebrate rather than mourn Oregon’s legal killing of the unborn—even those months, weeks, days or even minutes before birth.  Oregon needs a governor who, rather than advocating for laws to allow the killing of the unborn, will be an advocate for all Oregonians, even the unborn.